State-of-the-art cold store areas, advanced systems supporting the automation of logistics processes followed by energy and water saving features – these are just some of the solutions that distinguish the warehouse space developed by 7R for Żabka Polska. The BREEAM Excellent-certified development is located near Radzymin, in close proximity to Warsaw, and was designed in the Build-to-Suit (BTS) model. Its high standard and innovative solutions proved to be the key to success in the 11th edition of the Prime Property Prize 2022 competition. The facility was awarded in the "Development of the Year" category for logistics and industrial facilities.

The Prime Property Prize recognizes companies and projects that have had the greatest impact on the commercial real estate industry over the last year. Among this year's winners, there was the 7R brand. Its facility, developed for Żabka Polska, won the title of "Development of the Year" in the logistics and warehouse real estate category.

Our new logistics centre near Warsaw is the largest and most modern facility in the infrastructure of the Żabka’s supply chain. It’s also one of the most technologically advanced warehouse projects in this part of Europe. The building is equipped with innovative automatic solutions that will not only accelerate the logistics for stores and improve the quality of services to our franchisees, but also minimise the environmental impact of operations. To create such an innovative project, we needed a trusted partner with experience and approach to the development of modern, future-proof buildings that guaranteed the success of the project. Our cooperation with 7R ensured the top quality of this project, so we are all the more pleased with the award we received together.

Launching the first such advanced warehouse for the retail industry in Poland is a reason for us to be extremely satisfied. This is an example of how sustainability can be successfully combined with the business goals of our clients. It is worth noting that already at the design stage the development was carried out sustainably, minimising the environmental impact. This is a crucial aspect for us, and we are glad that our business partners also see it as an important competitive advantage. We are confident that the solutions implemented at the facility will help Żabka run its logistics operations even more efficiently and gain further market share. At the same time, we are proud to share our joint success. We appreciate the value of this special award.

The development completed by 7R for Żabka Polska includes approx. 60 000 m2 of modern logistics and warehouse space. The facility was developed in the Build-to-Suit (BTS) model, i.e. according to the individual needs of the Żabka chain to optimise all its logistics operations. The warehouse is distinguished by its large storage capacity and has been equipped with specialized cold store areas, in addition to high-end systems supporting the automation of logistics processes. The facility will eventually be able to distribute orders for about 5,000 Żabka stores.

During the project, the priorities included both the technological advancement of the warehouse and attention to low carbon emissions. As planned, the facility will ultimately be powered by green energy from photovoltaic panels and trigeneration units. The water-efficient fixtures will reduce water consumption. The biodiversity of the area around the warehouse has also been increased - flower meadows have been created and native species of trees and shrubs have been planted. In addition, there are shelters for bicycles and a designated space for ride-sharing cars, and in the future, there will be charging stations for electric vehicles.   As a result, the warehouse has already been BREEAM-certified at an Excellent level at the design stage of the project as part of its sustainability assessment. 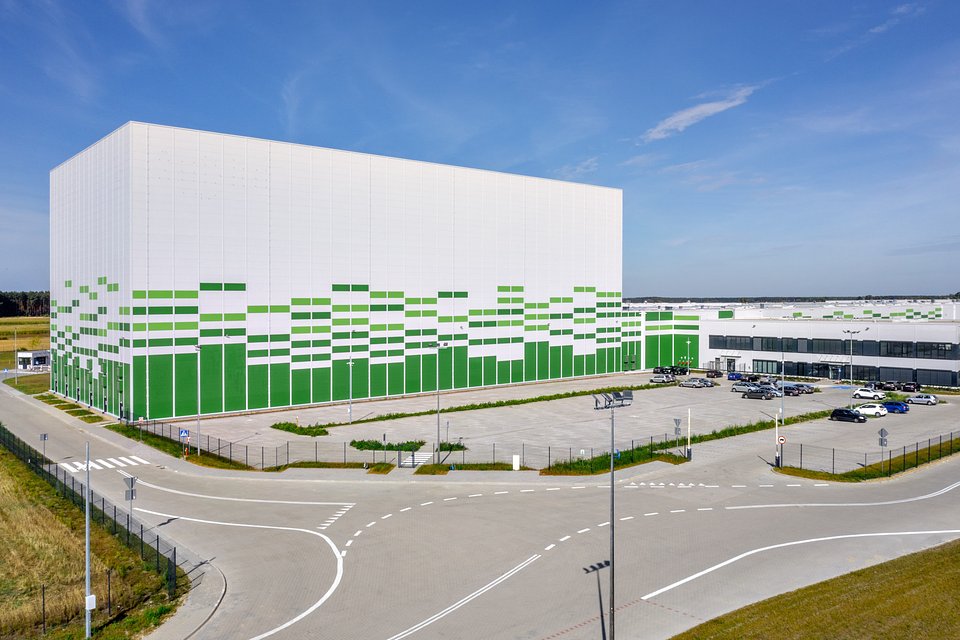 This is another Prime Property Prize for 7R. In 2020, the company was awarded in the "Green Building of the Year" category for the implementation of the BWI Group Research and Development Center in Balice.

7R, a leading warehouse developer, and DWS, a global real estate manager, have closed a transaction for the transfer of ownership of 7R Park Poznań East II, an eco-friendly warehouse park with a gross leasable area of over 51,000 sqm.

Logistics operator JAS-FBG has chosen 7R City Flex Katowice I as a base for its operations, where it will occupy over 6,000 sqm. The facility is scheduled to be commissioned in May 2023.

7R Park Wrocław West II has been granted a valid building permit. This is another development in the Lower Silesian Voivodship to be invested in by 7R. The facility will be built in Kąty Wrocławskie. Ultimately, it will provide nearly 44,000 sqm of class-A logistics and ...

7R, a company specializing in providing customers with innovative and eco-friendly warehouse and logistics space, has completed the sale of 7R Park Goleniów II to Macquarie Asset Management. The BTS (Build-to-Suit) format warehouse in Goleniów, near Szczecin, comprises o...